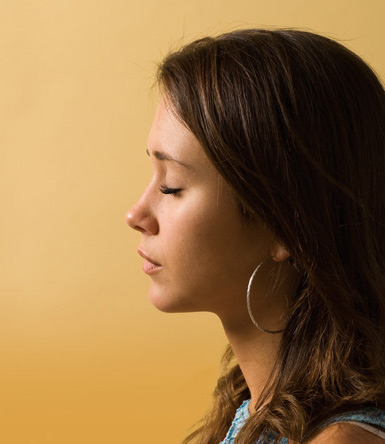 What is Transcendental Meditation?

The Transcendental Meditation® programme is a simple, natural procedure, practised for about 20 minutes morning and evening that allows our conscious thinking mind to settle down through finer and finer levels of thinking until it transcends thought and experiences the source of the thinking process, Transcendental Consciousness.

An analogy frequently employed by Maharishi may help to clarify this. The drawing below represents the ocean, which should be considered analogous to our minds.

The circles are air bubbles – larger near the surface and smaller nearer the seabed – which represent our thoughts. Normally, we experience thoughts on the surface of the mind where they are clear and “concrete”. Turning the attention inwards takes the mind from the experience of a thought at the conscious level to the experience of finer values of thoughts at deeper levels until we transcend, or go beyond, even the finest level and experience profound stillness, which we describe as Transcendental Consciousness.

Transcendental Consciousness, defined by Maharishi as “a field of pure awareness in which the mind is awake within itself, but without a thought”, is a fourth state of consciousness that is in addition to, and physiologically distinct from, our familiar sleeping, dreaming, and waking states. It is also considered to be a state of ‘restful alertness’, a physiological state of least excitation, or complete rest, with its own unique ‘signature’.

This signature is noted primarily in EEG research which can distinguish experiences of Transcendental Consciousness from other experiences during, for instance, Transcendental Meditation practice. Moments of transcending are defined by lower breath rates, high-frequency heart rate variability and higher alpha coherence in the frontal regions of the brain. Moreover, physiological correlates of such experiences include:

In 1958, very few people anticipated that the benefits of Transcendental Meditation practice would extend to society. Yet this is precisely what happened. The influence of Transcendental Meditation on society is known as the Maharishi Effect. The Maharishi Effect is defined as the influence of coherence and positivity in the social and natural environment and works by reducing negativity in the collective consciousness.